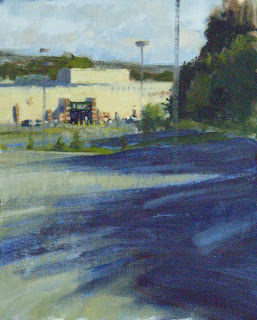 Some of you may remember the "Incident" where four county sheriff's were called to investigate your truly. Well... I had another run in with THE LAW. One early morning I innocently set up one foot from the "Public" sidewalk overlooking a local mall. The morning sun was blazing on the side of the building throwing shadows around and contrasting nicely with the cool atmosphere. As you can see from the painting there was nobody around and I had parked here at the very end of the parking lot. In comes the namesake of this posting the MALL COP. His shining vehicle yellow lights whirling approached and he exited to investigate the I'm sure strange vehicle parked way out in no man's land. Mind you, I had been painting for an hour and a half by this time and was finishing up. The guy didn't even see me and my giant tripod and easel set up not twenty feet away so I spoke up and he replied with "what are you doing?" Trying not to overstate the obvious or add any sarcasm I said "I'm painting." To try to make this long and I assure you entertaining story shorter, mall cop proceeded to interrogate me and ended up calling his boss to make sure I could "keep the painting." He had apparently been studying copyright and intellectual property law and was concerned I was in violation by PAINTING HIS MALL.
Well all's well that ends well and I was allowed to keep my painting after giving my driver's license as proof of identity and if they needed to track me down in case the painting was used for some nefarious purpose. He even wanted my address and phone number. The one bright note from the zealous fellow while calling his superior to see if I should be water boarded... " you do good work." ;)

Chad
I am an artist. I have been studying drawing and painting for years. The outdoors is my studio although it hasn't always been so. My early training was in studio and led to full-time atelier training. I learned much from a great teacher there but also discovered my true passion was the great outdoors. I turned my attention to painting "en plein air" and have never looked back.